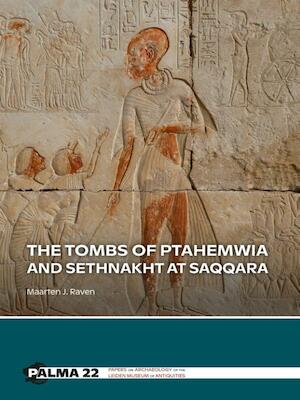 The two tombs dealt with in this book were discovered in 2007 and 2010 by the Leiden Expedition in the New Kingdom necropolis of Saqqara. Both date to the transition period between the reign of the heretic Pharaoh Akhenaten and the return to orthodoxy under his successor Tutankhamun. They are valuable additions to the growing corpus of funerary architecture from the Memphite cemeteries, yet they are quite different. Ptahemwia was a royal butler, presumably in the Memphite palace. The wall-reliefs and inscriptions of his tomb illustrate aspects of his professional life. Yet the career of the tomb-owner preserves some mysteries, such as the assumed change of his name, his potential foreign origins, and the reason why his tomb could not be finished according to plan. Sethnakht is an even more elusive person. This simple scribe of the temple of Ptah can hardly have been the main owner of the tomb next to Ptahemwia’s, which was started in the same lavish style and then remained undecorated. There are reasons to assume that Sethnakht was just one of the relatives of the owner, who – like Ptahemwia – seems to have suffered from the political vicissitudes of the period. This publication presents the results of the recent excavations, with an introduction on the biographical data of the tomb owners followed by detailed discussions of the tomb architecture and wall decorations, as well as the objects, pottery, and skeletal material found in the area. Thus it is aimed at an audience of professional readers with an interest in funerary archaeology. Contents: Preface Staff of the expeditions, 2007–2017 I The site and its history (Maarten J. Raven) II The family and career of Ptahemwia and Sethnakht (Maarten J. Raven) III The architecture (Maarten J. Raven) IV The reliefs and inscriptions (Maarten J. Raven and Harold M. Hays†) V The graffiti (W. Paul van Pelt and Nico T.B. Staring) VI Objects (Maarten J. Raven) VII Pottery (Barbara G. Aston) VIII Skeletal remains (Ladislava Horáčková) Concordance of excavation numbers and catalogue numbers Spatial distribution of finds List of designated features Abbreviations Bibliography Indices