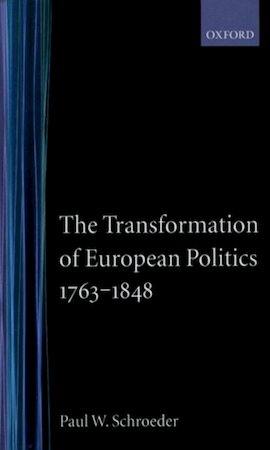 The Transformation of European Politics, 1763-1848

This is the only modern study of European international politics to cover the entire timespan from the end of the Seven Years' War in 1763 to the revolutionary year of 1848. Besides offering a comprehensive and authoritative account of this era's many wars, crises, and diplomatic developments, it reveals its unifying theme; the collapse of the eighteenth-century international system in a generation of great systemic wars from 1787 to 1812, the painful construction of a new international system from 1813 to 1815, and the successful operation of that system, giving Europe its most peaceful, progressive era of international politics ever. In a major reinterpretation of the structure and operation of the international system Professor Schroeder rejects most of the standard explanations for the failure of the earlier coalitions against Revolutionary and Napoleonic France, the success of the final one, and the durability of the Vienna Settlement. The secret of durable peace was not, he argues, military victory, the restoration of monarchical authority and a balance of power, and the fear of renewed revolution. It was instead the abandonment of competitive eighteenth-century balance-of-power politics in favour of a new political equilibrium, a balance of rights, security, and satisfactions, based upon a genuine, European-wide consensus on the meaning of peace and the kinds of rules and practices needed to sustain it. Thus the story of the transformation of European politics in this era offers insights and hope also for international politics today.