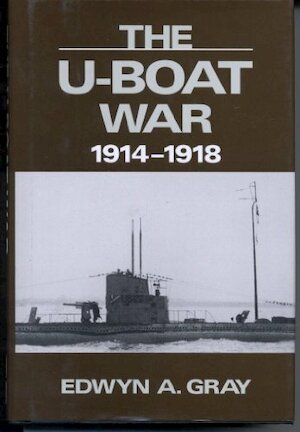 2.20PM Directly in front of us I sighted four funnels and the masts of a passenger steamer at right angles to our course coming from the SW and going towards Galley Head. 3:10 PM Torpedo shot at a distance of 700 meters below the surface - from the log of the German submarine U-20. The explosion that followed changed history as the date of the ship's log was may 7, 1915, the steamer was the Lusitania, and the torpedo sent 1195 innocent men, women, and children to a watery grave. In 1914, U-Boats were a new and untried weapon, and when such a weapon can bring a mighty empire to the briink of defeat there is a story worth telling. Edwyn Gray's The U-Boat War is the history of the Kaiser's attempt to destroy the British Empire by a ruthless campaign of unrestricted submarine warfare. It opens with Germany's first tentative experiments with the submarines and climaxes with the naval mutiny that helped bring down the Kaiser. In between is is a detailed account of a campaign of terror which, by April 1917,had the British Empire on the verge of surrender. The cost in lives and equipment was staggering. On the German side, 4894 sailors and 515 officers lost their lives in action; 178 German Submarines were destroyed by the allies; 14 were scuttled and 122 surrendered. According to the most reliable sources, 5,708 ships were destroyed by the U-Boats and 13,333 non-combatants perished in British Ships. World figures for civilian casualties were never released The U-Boat War is a savage but thrilling account of men fighting for their lives beneath the sea, and of the boats that changed the face of naval warfare.