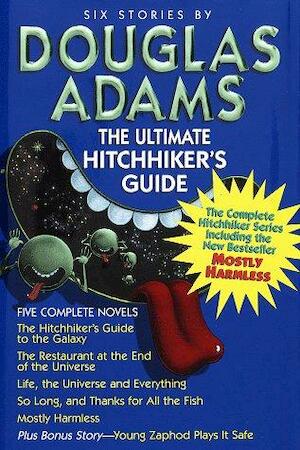 Finally, here they are in one outrageous volume--all six bestselling Hitchhiker stories by Douglas Adams, including his latest addition to the collection, "Mostly Harmless." Plus, you'll find a perplexingly frank introduction by the author himself, giving a behind-the-scenes look at the books and the zany radio series that inspired them. "The Hitchhiker's Guide to the Galaxy: " Arthur Dent, mild-mannered, out-to-lunch kind of guy, is plucked from Earth just before it is demolished to make way for a hyperspace bypass. Towel in hand, he begins his journey through space and time with his rescuer Ford Prefect, a traveling researcher for the "Guide." "The Restaurant at the End of the Universe: " The floor show is Doomsday while Arthur and Ford dine with Zaphod Beeblebrox, well-appendaged, ex-head honcho of the Universe, and Trillian, his human girlfriend. "Life, the Universe and Everything: " Everything important and then some is examined in this third book, when Arthur Dent and his companions find they must avert Armageddon and save the Universe for life as we know it (or think we know it!) "So Long, and Thanks for All the Fish: " Galaxy-weary space traveler Arthur Dent returns to Earth with his new voidoid gang to discover that it has been mysteriously reinstated. "Young Zaphod Plays It Safe: " The two-headed hero travels to the depths of the ocean floor to investigate the mysterious destruction of the ship that "could one hundred percent positively never crash." "Mostly Harmless: " Once again, Arthur Dent tries to return to Earth, but instead settles for an honorary position as master sandwich maker.If you're just discovering Douglas Adams's galactic gangbuster of aseries, don't panic: "The Ultimate Hitchhiker's Guide: " is your chance to have it all! (Towel not included.)