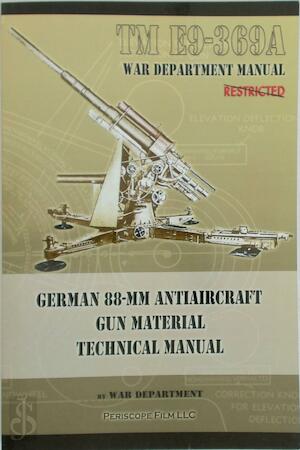 The 88-mm gun was a German anti-aircraft and anti-tank artillery gun from World War II. It was used substantially by Germany throughout the war, and was one of the most recognized German weapons of the war. Development of the 88-mm led to a wide variety of weapons.The 88-mm name applies to a series of guns, the first one officially called the Flak 18, then the improved Flak 36, and later the Flak 37. Flak is a contraction of the German word Flugzeugabwehrkanone, meaning "aircraft-defense cannon", the original purpose of the eighty-eight. In English, "flak" became a generic term for ground anti-aircraft fire. In informal German use, the guns were universally known as the Acht-acht, meaning eighty-eight.During the North African campaign, German Field Marshal Erwin Rommel, also known as The Desert Fox, made the most effective use of the weapon, as he lured tanks of the British 8th Army into traps by baiting them with apparently retreating tanks. When the enemy tanks pursued, hidden 88-mm guns picked them off at ranges far beyond those of the tank’s guns. A mere two flak battalions destroyed 264 tanks throughout 1941.Created in 1943, this technical manual reveals a great deal about the 88-mm’s design and capabilities. Intended as a manual for those responsible for operation and maintenance, it details many aspects of the 88-mm’s assembly, recoil and accessories. Originally labeled restricted, this manual was declassified long ago and is here reprinted in book form. Care has been taken to preserve the integrity of the text.