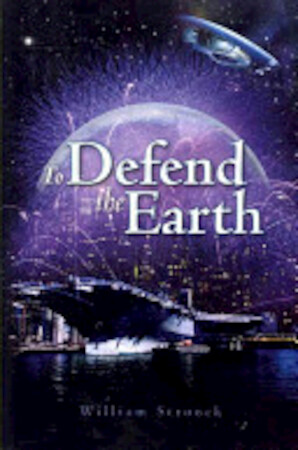 To Defend the Earth

A collection of short stories about an alien invasion of earth. Chapter-1 Presidential Briefing: The newly elected president is briefed by a secret committee which tells her of the alien's approach. The president learns the background of the discovery as well as American military capabilities which include ASAT missiles, Mid-Course Interceptors and airborne lasers. In Washington the pundits wonder, can a president who campaigned on defense cuts and 'bringing the troops home' wage a war against alien invaders? Chapter-2 Kim is ill: North Korean dictator, Kim Jong Il, offers to make an alliance with the approaching aliens. In response China and the United States attack.... Chapter-3: Lt. Wales, the King: In London a pacifist prime minister orders the British armed forces to stand down and the new king moves to stop him. Chapter-4: The Waiting Below: As the war unfolds above, the crew of the USS Olympia bides time and hopes the boat's orders will never have to be carried out. Chapter-5: Citadel: A grizzled news man and a young videographer cover the alien attack on Iceland, a key US base in the defense of Earth. Chapter -6: The French Interrogator's Alien: The French have captured an alien. A cynical interrogator discovers his motivations are very human. Chapter-7: Arawat Kill Box: The aliens invade the sub-continent and take on the cream of the Indian Army, the 1st Armoured Division, the Black Elephants or Arawat in Hindi. Chapter-8: Rising Again: A Japanese skipper takes command of the surviving ships of an American carrier battle group and battles an alien starship. Chapter-9: Guitars and Stars: A guitar playing vagabond flees to his family's mountain home only to find his estranged brother and his family are already there. Oh, and the aliens show up too, but they've never seen anything like the fighting Canavan brothers. Chapter-10: Third Temple: Far into the future; a religious ceremony commemorates the alien invasion of earth. Chapter-11: The Battle of Luna: A decade after the war the United States Space Ship Wasp attacks alien bases on the moon.