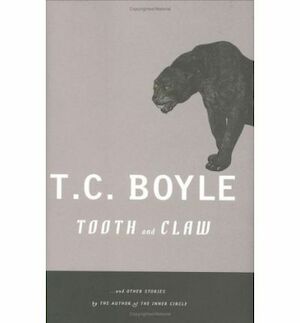 Since Descent of Man appeared in 1979, T. C. Boyle has transformed the nature of short fiction in our time; in a review of his most recent collection, After the Plague, The New York Times hailed him as Â“a writer who can take you anywhere.Â” Which is exactly what Boyle does in Tooth and Claw.

These fourteen stories, which have appeared in The New Yorker, GQ, HarperÂ's, McSweeneyÂ's, and Playboy, display BoyleÂ's imaginative muscle, emotional sensitivity, and astonishing range. Here you will find the whimsical tales for which Boyle is famous, including Â“The Kind Assassin,Â” about a radio shock jock who sets the world record for most continuous hours without sleep. Readers will love the comedic drama of the title story, about a man who must contend with a vicious cat from Africa that he has won in a bet. And who could resist the gripping power of Â“Dogology,Â” about a woman who becomes so obsessed with manÂ's best friend that she begins to lose her own identity to a pack of strays. Boyle here proves once again that he is Â“a writer who can take any topic and spin a yarn too good to put downÂ” (MenÂ's Journal).