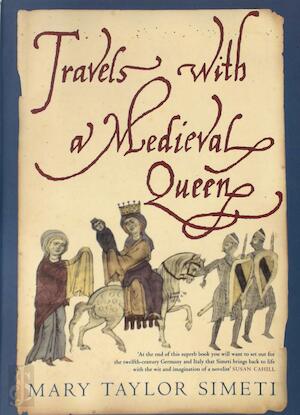 Travels with a Medieval Queen

Living in the second half of the twelfth century, Princess Constance of Hauteville was both witness and protagonist in what could be considered the most exciting period in medieval history. There had been a remarkable growth in the population and in the economy of western Europe and a consequent expansion of cities and commerce. With the support of the secular rulers and the Church, Knighthood had been institutionalised and the Courtly Love school of poetry was born. In 1185, the 32 year old Constance of Sicily, a princess with the most magnificent dowry Europe has ever seen, was betrothed to the 21 year old Henry, cold-hearted son of the great German Emperor, Frederick Barbarossa. Eight years later, the Sicilian throne lies empty and Henry and Constance (pregnant for the first time at 40) travel south to stake their claim against the usurper, Tancredi's family. It is this journey that Taylor Simeti retraces, along the way contrasting medieval society with modern, capturing what the life of the medieval queen must have been like, exploring the idea of travel and pilgrimage, and expressing, above all, a deep empathy for her subject. This is a reflexive, imaginative and entertaining account of Constance's life and travels.

"Travels with a Medieval Queen" is ook verkrijgbaar als