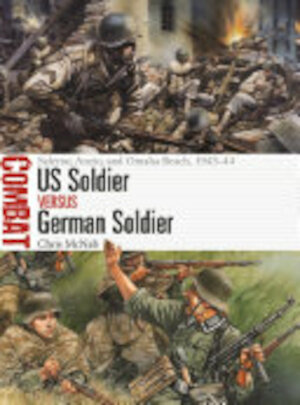 US Soldier vs German Soldier

This absorbing study investigates the doctrine, training, equipment, and combat record of the US specialist beach-landing troops and their German opponents who fought over three bitterly contested amphibious beachheads in Europe at the height of World War II.

During World War II, the US Army and its allies faced a formidable challenge: the need to assault Hitler's “Fortress Europe” from the sea. As a result, during 1941--45, the US Army had to add amphibious assault to its list of combat capabilities. Officers and troops from across the US Armed Forces had to develop the techniques and technologies to assault the coasts of Axis-occupied Europe, from logistics to beach assault and beachhead consolidation, and more. In order to win and hold a contested beachhead in the face of bitter enemy resistance, the amphibious-warfare specialists played a variety of essential battlefield roles; if the US troops could not establish a beachhead quickly, they risked being thrown back into the sea. For their part, the Germans had to devise a practical defensive doctrine that made the most of the limited resources and troops available and the terrain. The German infantry defenders immediately around the landing areas had to be able to call upon support from nearby artillery, mechanized troops, and armored forces to have a chance of containing the enemy beachhead.

This illustrated study analyses the specialist beach-landing troops involved in three key battles--the Allied amphibious landings at Salerno and Anzio in Italy, and Omaha Beach in Normandy--focusing upon the US Army's various types of beach-assault specialists and their German opponents, whose combat experience and effectiveness varied considerably. Each of the three featured battles is then examined in detail, exploring how the Germans made defensive preparations; how the US troops planned to overcome them; and the immediate actions undertaken by the US amphibious specialists and their German opponents both during and following the main assault landings.