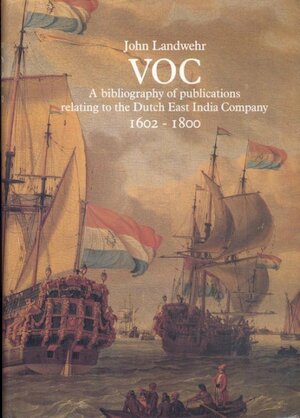 a bibliography of publications relating to the Dutch East India Company, 1602-1800

At the height of its power and influence in the seventeenth and eighteenth century the VOC - acronym for the United Netherland East India Company -was the greatest commercial concern in the world. The scope of its activities extended from the Cape of Good Hope to Japan. In some aspects, the Baltic trade and the North Sea fisheries were of more fundamental relevance for the economy of the Lowlands. But it was the more spectacular East Indian trade which aroused the admiration and the envy of foreigners, sometimes to the point of war. In this bibliography several topics are covered. Not only technical matters such as the legal status of the VOC, its management, directors and shareholders, but also subjects as voyages, battles, ship building, navigation, geography, natural history, ethnography, mission work, ministration, and many others.
John Landwehr was employed by a trading company in the Far East (1949-1954). He worked in the ancient VOC House in Djakarta built by Governor General Baron Van Imhoff in the 18th century.
"A book which I dearly needed during a lifetime research in the history of the VOC" (C.R. Boxer). "A good, systematic reference work of printed material related to the VOC has been long hoped for. John Landwehr has finally taken the initiative to fill this need. The result of his afforts are now available. This book will be a very useful instrument for the scholarly researcher, but also for the interested laymen who wants to know more about the greatly varied areas the VOC was active" (G. Schilder).