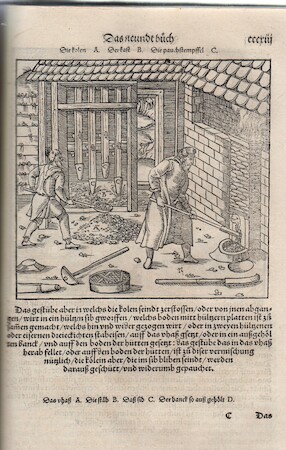 First German edition of Agricola´s famous work on metallurgy (original title: De re metallica libri xii [12 books on the nature of metals], 1556). Georgius Agricola (=Georg Pawer, 1494-1555) was born in Glauchau. His interest in mining began during his studies of medicine, physics and chemistry, but became poignant during his appointment as physician in Joachimsthal, a centre of mining and smelting works. Here, he decided to test theories on metallurgy and mineralogy. Later he moved from Joachimsthal to Chemnitz, the epicenter of the German mining industry, where he could intensify and freely pursue his studies into the art of mining. The book is a systematic treatise on state of the art of mining, detailing the extraction and processing of metal ore. Agricola also gives information on how to identify ore veins in the ground and describes prospecting and surveying in great detail. The woodcut illustrations show numerous uses of the watermills and winches in mining, among many other technical details. The rear of the book contains a list of terminology in German with their Latin translations. This work, building on Pliny´s Historia Naturalis, has long remained a standard work in the field of metallurgy. *P.M.M. 79 / Hoover 18 / Ward & Carozzi 31 / Dibner 88.

In 19th century half calf with marbled boards, a leather title ticket and gilt decoration to the spine. This copy with cropped margins, and scattered marginal annotations in ink. Pages lxxviii & lxxix were stuck together (now loose, damaging the page and illustration a little), a stain to the illustrations on page xxxvi-xxxvii. A quite crisp and clean copy in very good condition. The later spine faded.