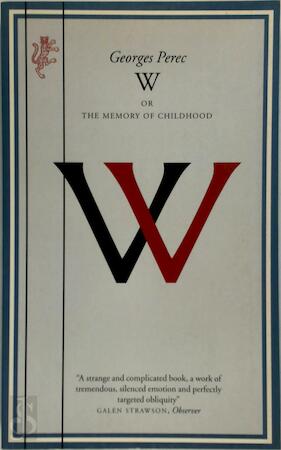 W, or the Memory of Childhood

W consists of two parallel tales â€“ Perec's disturbing account of his wartime childhood is interspersed with the surreal tale of W., an island state based on the rules of sport. In the fictional narrative a man adopts the identity of one Gaspard Winckler. When he undertakes a journey in search of the real Winckler and his fate, he leads the reader into the descriptions of the island-state where citizens are forced to compete in athletic competitions for the basics of life. Intertwined with the fictional narrative are Perec's stories of his past â€“ his father's death in the French army, his mother's transportation to Auschwitz, his own upbringing with relatives â€“ and his attempts to pin down his true memories rather than memories created for him by language, by images, by others. Fiction and autobiography interweave throughout Perec's text until, in a final chapter, the two literary categories seem to merge together.