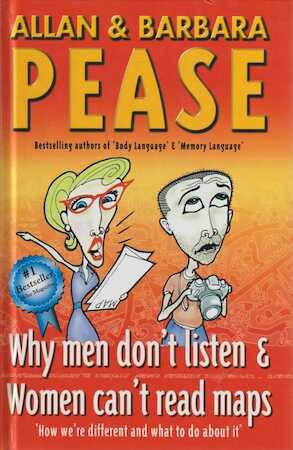 The book that's taking Britain by storm! 10 weeks at number one in Australia now a bestseller in the UK after just four weeks: number 2 at Bertrams, 3 at THE, top 20 on Amazon for ten weeks - outselling Men are From Mars by 10 to one. Bestselling authors Allan and Barbara Pease - four million copies of Body Language in print in 32 countries - spotlight the differences between the way men and women think. Barbara and Allan Pease travelled the world collating the dramatic findings of new research on the brain, investigating evolutionary biology, analysing psychologists research, studying social change and annoying the locals. The result is Why Men Don't Listen and Women Can't Read Maps the sometimes shocking, always illuminating, frequently hilarious look at where the battle line is drawn between the sexes, why it was drawn and how to cross it. Revealed: Why men really can't do more than one thing at a time Why women make such a mess of parallel parkingWhy men should never lie to women Why women talk so much and men so littleWhy men love erotic images and women aren't impressed Why women prefer to simply talk it throughWhy men offer solutions, but hate advice Why women despair about men's silencesWhy men want sex, and women need love WHAT MEN AND WOMEN REALLY WANT This is a must-read for all men and women who love each other, hate each other, or simply co-exist. You will learn as much about yourself and how to improve your relationships, as you will about the opposite sex.