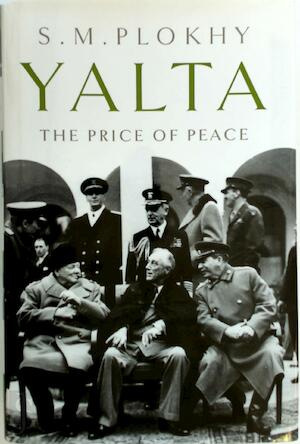 Yalta: The Price of Peace

A major new history of the eight days in February 1945 when FDR, Churchill, and Stalin decided the fate of the world

Imagine you could eavesdrop on a dinner party with three of the most fascinating historical figures of all time. In this landmark book, a gifted Harvard historian puts you in the room with Churchill, Stalin, and Roosevelt as they meet at a climactic turning point in the war to hash out the terms of the peace.

The ink wasn't dry when the recriminations began. The conservatives who hated Roosevelt's New Deal accused him of selling out. Was he too sick? Did he give too much in exchange for Stalin's promise to join the war against Japan? Could he have done better in Eastern Europe? Both Left and Right would blame Yalta for beginning the Cold War.

Plokhy's conclusions, based on unprecedented archival research, are surprising. He goes against conventional wisdom-cemented during the Cold War- and argues that an ailing Roosevelt did better than we think. Much has been made of FDR's handling of the Depression; here we see him as wartime chief. Yalta is authoritative, original, vividly- written narrative history, and is sure to appeal to fans of Margaret MacMillan's bestseller Paris 1919.