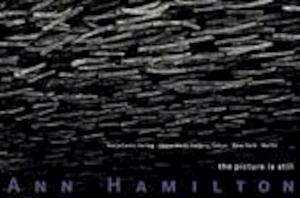 The Picture Is Still

The installations by the American artist Ann Hamilton are as atmospheric as they are intellectually complex, and are often of grandiose dimensions: Tons of work clothes, penny coins or printing letters, together with people acting and even animals, characterize her process-like, site-specific environments. Viewers are incorporated as if in a play, and are taught to use their senses anew. In her most recent work the "Picture is still, which is featured in this oversized book, the artist consciously refrained from adding animated elements in a former torpedo factory at Yokosuka--a symbol-laden place in Japan, consecutively used by domestic and American armies for extensive military bases--Ann Hamilton processed enormous amounts of local fuel: Charcoal rods made of short pieces of branches and tree trunks. These are suspended from the ceiling on strings of different lengths, some of them so low that viewers almost have to stoop when they walk across the hall, oppressed by the heavy shadows of the dense, blackened mass of dead matter above them like by a murder of crows. Hamilton has created a space filled with abysmal sadness--an image that conjures up the darker chapters of Japanese American history.