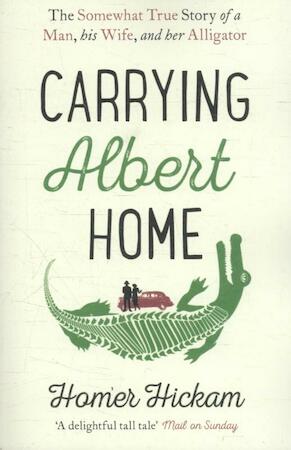 In 1930s America, the Great Depression made everyone's horizons smaller, and Elsie Lavender found herself back where she began, in the coalfields of West Virginia.
She had just one memento of her halcyon days - a baby alligator named Albert.

Then one day, her husband's stoical patience snapped and Elsie had to choose between Homer and Albert.
She decided that there was only one thing to do: they would carry Albert home to Florida.

And so began their odyssey - a journey like no other, where Elsie, Homer and Albert encountered everything from movie stars and revolutionaries to Ernest Hemingway and hurricanes in their struggle to find love, redemption,
and a place to call home.

From the bestselling author of Rocket Boys-the basis of the movie October Sky-comes a long-awaited prequel. Big Fish meets The Notebook in this novel about a man, a woman, and their alligator.