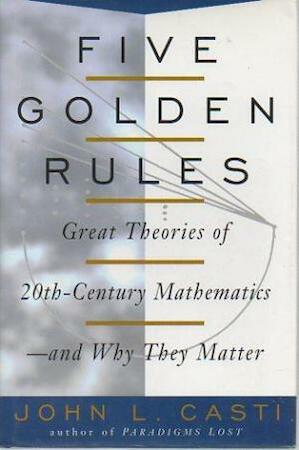 Great Theories of 20th-Century Mathematics - And Why They Matter

An accessible and engaging treatment of the world's greatest mathematical theorems. Devoted to one theorem, each chapter introduces the mathematicians who created the theorem and the history of math at that time. Explains, in simple terms, what the theorem says and how it was proved. Numerous diagrams, cartoons and examples illustrate how the theorem works and bring the math to life.

Praise for Five Golden Rules "Casti is one of the great science writers of the 1990s. . . . If you'd like to have fun while giving your brain a first-class workout, then check this book out."-Keay Davidson in the San Francisco Examiner. "Five Golden Rules is caviar for the inquiring reader. . . . There is joy here in watching the unfolding of these intricate and beautiful techniques. Casti's gift is to be able to let the nonmathematical reader share in his understanding of the beauty of a good theory." -Christian Science Monitor. "Merely knowing about the existence of some of these golden rules may spark new, interesting-maybe revolutionary-ideas in your mind." -Robert Matthews in New Scientist (United Kingdom). "This book has meat! It is solid fare, food for thought. Five Golden Rules makes math less forbidding and much more interesting." -Ben Bova in the Hartford Courant "With this groundbreaking work, John Casti shows himself to be a great mathematics writer. Five Golden Rules is a feast of rare new delights all made perfectly comprehensible." -Rudy Rucker, author of The Fourth Dimension. "With the lucid informality for which he has become known, John Casti has written an engaging and articulate examination of five great mathematical theorems and their myriad applications." -John Allen Paulos, author of A Mathematician Reads the Newspaper.