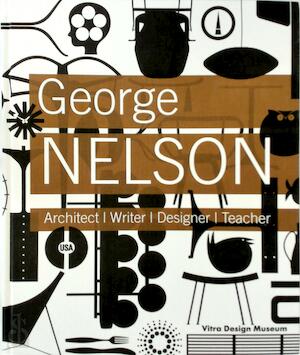 The year 2008 marks the 100th birthday of George Nelson (1908-1986), one of the most influential figures in American design during the second half of the twentieth century. Nelson, who earned an architectural degree from Yale, was not only a leading designer and notable architect, but also a prominent author, editor, lecturer, exhibition designer, and a passionate photographer. As Design Director at the Herman Miller Furniture Company, Nelson played a key role in developing the products and public image of the firm over a period of more than two decades - a pioneering achievement in the field of corporate design. Many modern furniture classics and exemplary interior designs emerged from this collaboration. Nelson also contributed important ideas to the topic of domestic living with new concepts for home building and interior furnishing. His innovative ideas about the work environment played an equally significant role in the development of the modern office landscape. In addition to these achievements, Nelson was recognized throughout his life as a discriminating editor and brilliant author, publishing a dozen books and more than 100 articles and essays on design topics. The exhibition catalogue accompanies the first comprehensive retrospective of George Nelson's work. With eight essays by German and American design historians, the publication deals with all of the areas in Nelson's oeuvre, many of which are presented here for the first time. The catalogue also includes an illustrated list of works. The majority of illustrations, previously unpublished, come from the Nelson Estate in the Vitra Design Museum Archive.