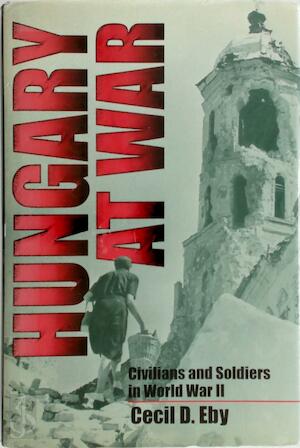 In Hungary at War, Cecil Eby has compiled a historical chronicle of Hungary's wartime experiences based on interviews with nearly one hundred people who lived through those years. Here are officers and common soldiers, Jewish survivors of Auschwitz and Bergen-Belsen concentration camps, pilots of the Royal Hungarian Air Force, Hungarian prisoners of war in Russian labor camps, and a host of others. We meet the apologists for the Horthy regime installed by Hitler and the activists who sought to overthrow it, and we relive the Red Army's siege of Budapest during the harsh winter of 1944-45 through the memories of ordinary citizens trapped there. Most of the accounts shared here have never been told to anyone outside the subjects' families. We learn of a woman, Ilona Joó, who survived in a cellar while German and Russian armies used her house and garden as a battleground, and of the remarkable Merényi sisters, who trekked home to Budapest after being freed from Bergen-Belsen. Eby has also included a rare interview with a former member of the Arrow Cross, Hungary's fascist party, that sheds new light on its leadership. From these personal accounts, Eby draws readers into the larger themes of the tragedy of war and the consequences of individual actions in moments of crisis. Skillfully integrating oral testimony with historical exposition, Hungary at War reveals the knot of ideological, economic, and ethnic attachments that entangled the lives of so many Hungarians. The result is an absorbing narrative that is a fitting testament to a nation buffeted by external forces beyond its capacity to control.