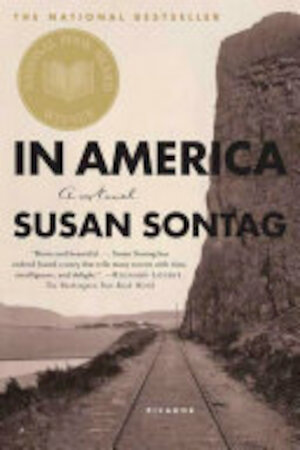 "The Volcano Lover, Susan Sontag's bestselling 1992 novel, retold the love story of Lady Emma Hamilton and Lord Nelson with consummate power. In her enthralling new novel-once again based on a real story-Sontag shows us our own country on the cusp of modernity. In 1876 a group of Poles led by Maryna Zalewska, Poland's greatest actress, travel to California to found a "utopian" commune. Maryna, who has renounced her career, is accompanied by her small son and husband; in her entourage is a rising young writer who is in love with her. The novel portrays a West that is still largely empty, where white settlers confront native Californians and Asian coolies. The image of America, and of California-as fantasy, as escape, as radical simplification-constantly meets a more complex reality. The commune fails and most of the migrs go home, but Maryna stays and triumphs on the American stage. In America is a big, juicy, surprising book-about a woman's search for self-transformation, about the fate of idealism, about the world of the theater-that will captivate its readers from the first page. It is Sontag's most delicious, most brilliant achievement." -- Publisher's description.