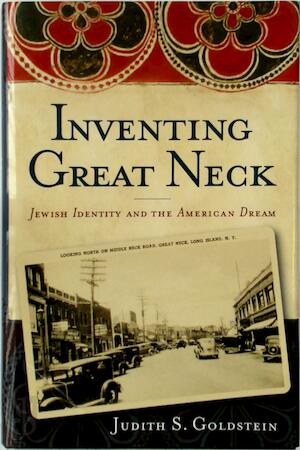 Jewish Identity and the American Dream

Great Neck, New York, is one of America's most fascinating suburbs. Settled by the Dutch in the 1600s, generations have been attracted to this once quiet enclave for its easy access to New York City and its tranquil setting by the Long Island Sound. This illustrious suburb has also been home to a number of film and theatrical luminaries from Groucho Marx and Oscar Hammerstein to comedian Alan King and composer Morton Gould. Famous writers who have lived there include Ring Lardner and of course, F. Scott Fitzgerald, who used Great Neck as the inspiration for his classic novel ""The Great Gatsby"". Although frequently recognized as the home to well-known personalities, Great Neck is also notable for the conspicuous way it transformed itself from a Gentile community, to a mixed one, and, finally, in the 1960s, to one in which Jews were the majority. In ""Inventing Great Neck"", Judith S. Goldstein tells this lesser known story. The book spans four decades of rapid change, beginning with the 1920s. Throughout the early half of the century, Great Neck was a leader in the reconfiguration of the American suburb, serving as a playground of rich estates for New York's aristocracy. Throughout the forties, it boasted one of the country's most outstanding school systems, served as the temporary home to the United Nations, and gave significant support to the civil rights movement. During the 1950s, however, the suburb diverged from the national norm when the Gentile population began to lose its dominant position. ""Inventing Great Neck"" is about the allure of suburbia, including the institutions that bind it together, and the social, economic, cultural, and religious tensions that may threaten its vibrancy. Anyone who has lived in a suburban town, particularly one in the greater metropolitan area, will be intrigued by this rich narrative, which illustrates not only Jewish identity in America but the struggle of the American dream itself through the heart of the twentieth century.