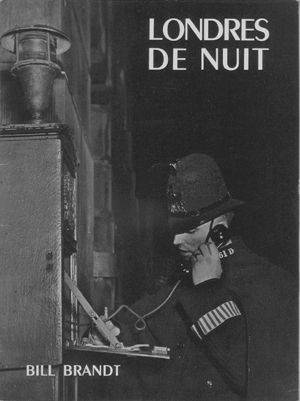 First edition. Brandt‟s second book, A Night in London, was published in London and Paris in 1938. It was based on Paris de Nuit (1936) by Brassaï, whom Brandt greatly admired. The book tells the story of a London night, moving between different social classes and making use – as with The English at Home – of Brandt‟s family and friends. Night photography was a new genre of the period, opened up by the newly developed flashbulb (the „Vacublitz‟ was manufactured in Britain from 1930). Brandt generally preferred to use portable tungsten lamps called photo-floods. He claimed to have enough cable to run the length of Salisbury Cathedral. James Bone introduced Brandt‟s book and described the new, electric city: „Floodlit attics and towers, oiled roadways shining like enamel under the street lights and headlights, the bright lacquer and shining metals of motorcars, illuminated signs...‟ Very Rare