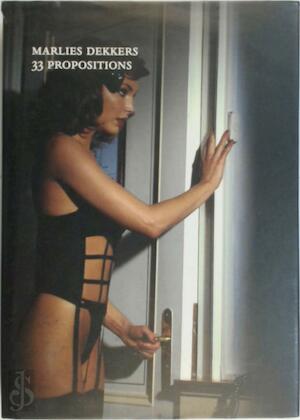 A book about the essence, promise, and practice of Marlies Dekkers (1965), the most original and inventive lingerie designer working today. Marlies Dekkers has been strongly influenced by the writings of Plato, Dante, Georges Bataille, and others of like caliber. She looks to visual artists, such as Hans Bellmer and Balthus, for inspiration and metaphysical encouragement. Filmmakers like Peter Greenaway, David Lynch, and John Cassavetes are of seminal importance to her. The book’s title, 33 PROPOSITIONS, hints at its contents: 33 different ways of looking at the world. Each proposition is put forward as a word. Beauty. Eroticism. Rapture. Sensuality. Desire. Reverence. And so on. Each word initiates a telling. Each telling reveals something about Marlies Dekkers. Each telling says something about the reader, too.