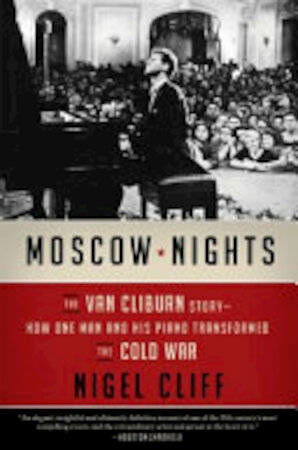 Gripping narrative nonfiction that tells the dramatic story of a remarkable young Texan pianist, Van Cliburn, who played his way through the wall of fear built by the Cold War, won the hearts of the American and Russian people, and eased tensions between two superpowers on the brink of nuclear war.

In 1958, an unheralded twenty-three-year-old piano prodigy from Texas named Van Cliburn traveled to Moscow to compete in the First International Tchaikovsky Competition. The Soviets had no intention of bestowing their coveted prize on an unknown American; a Russian pianist had already been chosen to win. Yet when the gangly Texan with the shy grin took the stage and began to play, he instantly captivated an entire nation.

The Soviet people were charmed by Van Cliburn’s extraordinary talent, passion, and fresh-faced innocence, but it was his palpable love for the music that earned their devotion; for many, he played more like a Russian than their own musicians. As enraptured crowds mobbed Cliburn’s performances, pressure mounted to award him the competition prize. "Is he the best?" Soviet Premier Nikita Khrushchev demanded of the judges. "In that case . . . give him the prize!"

Adored by millions in the USSR, Cliburn returned to a thunderous hero’s welcome in the USA and became, for a time, an ambassador of hope for two dangerously hostile superpowers. In this thrilling, impeccably researched account, Nigel Cliff recreates the drama and tension of the Cold War era, and brings into focus the gifted musician and deeply compelling figure whose music would temporarily bridge the divide between two dangerously hostile powers.