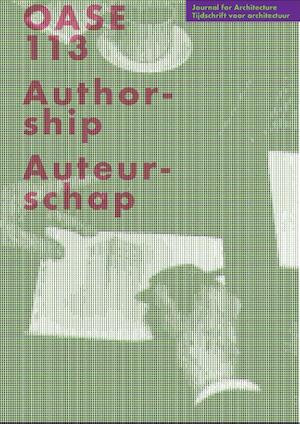 What does the author’s ’owning’ of a project mean? And does this sense of ownership still prevail in contemporary architecture culture? Is the concept of individual authorship not a cul-de-sac, preventing the processes of invention and innovative thinking often necessary for addressing a practice that is more collaborative than ever? What, then, might be the essential argument for retaining the concept of authorship in architecture today? Perhaps the most resounding argument is this: authorship is not only an act that implies originality, it is also a deeply felt commitment to a work that until its realisation belonged only to the author, but to which he or she is also completely devoted. Wouldn’t it be more interesting to imagine the concept of the author in architecture as a space of possibility, as a field in which the responsibility, the commitment, even being completely absorbed by the work of invention, is distributed among several heads and hands? Oase 113 wants to take a position in relation to the ways in which authorship in architectural practice is both claimed and addressed. It wants to argue for the importance of authorship and explore a wider variety of its conceptions in architectural practice.