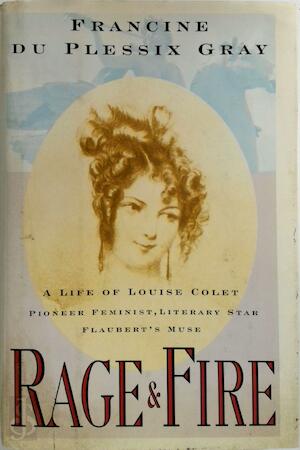 In this ground-breaking biography of a heroic feminist and literary figure, novelist and essayist Francine du Plessix Gray brilliantly resurrects one of the most fascinating women of the nineteenth century. To English-language readers, the flamboyant and beautiful Louise Colet (1810-1876) is best known as Gustave Flaubert's great love; as a central model for Emma Bovary; and as the recipient of Flaubert's most treasured letters, a voluminous six-year correspondence that offers his most eloquent statements on literature and an invaluable chronicle of Madame Bovary's composition. What is less known about Louise Colet is that at the apogee of her career she was, along with George Sand, one of the most famous women writers in France, a prolific author equally fluent in poetry, fiction, historical essays, and journalism. Known as "the Muse", Colet presided over a renowned salon of mid-nineteenth-century Paris. At age twenty-nine she won the poetry prize of the Academie Francaise, and she went on to receive the prize three more times in the next fourteen years, more often than any other woman in French history. The confidante of Madame Recamier, Victor Hugo, and Leconte de Lisle and a lover of Alfred de Vigny and Alfred de Musset, this self-supporting single mother refused to share her home with a man lest it compromise the principle of liberty she lived by. In her work, Louise Colet was one of the first nineteenth-century authors to explore the historical causes of female alienation; in her private life, she pioneered a new model of womanhood in an age when the only sanctioned options for women were "housewife or whore". Drawing from Colet's recently discovered journals, which, likeFlaubert's letters, can be startlingly erotic, Gray vividly brings to life this formidable woman's world and unmasks the astonishing sexual and social mores of nineteenth-century France. Written in a novelistic, richly detailed style but researched with meticulous scholarship, this biography portrays the complexities of a woman who ascended to fame and literary respectability through her talent and a willful spirit that refused to acknowledge the word "no".