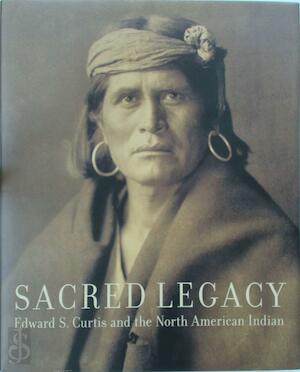 One hundred years ago, Edward Sheriff Curtis began a thirty-year odyssey to photograph and document the lives and traditions of the Native peoples of North America. This monumental project was hailed by The New York Herald as "the most gigantic undertaking since the making of the King James edition of the Bible."

In this landmark volume, almost 200 of the finest examples of Cu rt is's photographs are reproduced with startling fidelity to his original prints. Produced to the very highest standards, Sacred Legacy presents Curtis's work without compromise for the first time in the modern era. Taken together, these profound images constitute no less than the core and essence of his life's work. Until now, virtually none of Curtis's photographs have been reproduced in a manner that captures the clarity and richness of his original master prints. In Sacred Legacy, his greatest images are reproduced from the finest source materials available -- a significant number from breathtaking platinum, gold, and silver prints. All have been carefully selected for pub lication and for an accompanying international exhibition by Curtis authority Christopher Cardozo.

In an effort to bring a new understanding to Curtis's monumental work, Sacred Legacy was developed according to the organizing principles set forth by the great photographer himself. Following the path la id out in his 20 volume magnum opus, The North American Indian, geographic regions are presented separately and individual tribes within each region are depicted and described. Interspersed between these sections are compelling portrayals of those aspects of life common to all tribes, among them spirituality. ceremony, arts, and the activities of daily life.

With The North American Indian, Curtis achieved the impossible: an extraordinary 20 -volume set of handmade books composed of nearly 4,000 pages of text and 2,200 images presenting more than 80 of North America's Native nations. Luminous, iconic, and profoundly revealing, the pictures that form the heart of the original project are reproduced here in Sacred Legacy. These extraordinary photographs had an immense impact on the national imagination and continue to shape the way we see Native life and culture.

Sacred Legacy is a fitting testament to the profound beauty, meaning, and complexity of Indian life and to Edward S. Curtis -- a man whose wisdom, passion, and strength drove him to devote thirty years to capturing the nobility and pride of the Native peoples of North America. The photographs in this brilliant volume represent the most important presentation of Curtis's work since the publication of the first volume of Me North American Indian nearly a century ago.