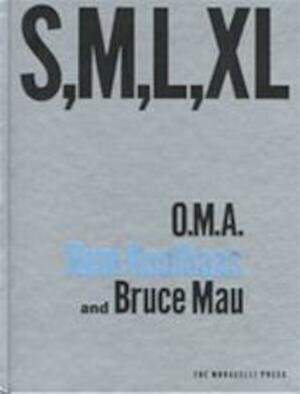 S,M,L,XL presents a selection of the remarkable visionary design work produced by the Dutch firm Office for Metropolitan Architecture (O.M.A.) and its acclaimed founder, Rem Koolhaas, in its first twenty years, along with a variety of insightful, often poetic writings. The inventive collaboration between Koolhaas and designer Bruce Mau is a graphic overture that weaves together architectural projects, photos and sketches, diary excerpts, personal travelogues, fairy tales, and fables, as well as critical essays on contemporary architecture and society.

The book's title is also its framework: projects and essays are arranged according to scale. While Small and Medium address issues ranging from the domestic to the public, Large focuses on what Koolhaas calls "the architecture of Bigness." Extra-Large features projects at the urban scale, along with the important essay "What Ever Happened to Urbanism?" and other studies of the contemporary city. Running throughout the book is a "dictionary" of an adventurous new Koolhaasian language -- definitions, commentaries, and quotes from hundreds of literary, cultural, artistic, and architectural sources.

Rem Koolhaas is founder of the Office for Metropolitan Architecture (O.M.A.); the firm's most important projects include the Lille Grand Palais in Lille; the Kunsthal in Rotterdam; Netherlands Dance Theatre in The Hague; Nexus Housing in Fukuoka; the Dutch House in Holland; and Villa dall'Ava in Paris, all of which are included in S,M,L,XL. Koolhaas is author of the seminal Delirious New York and professor in practice of architecture and urban design at the Harvard Graduate School of Design.

Bruce Mau founded the critically acclaimed firm Bruce Mau Design in 1985. He is the author of Life Style and Massive Change.