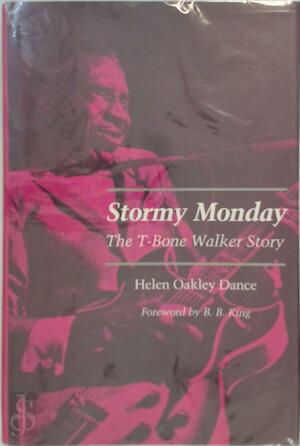 The most significant factor in the career of Aaron “T-Bone” Walker was his ability to bridge the worlds of blues and jazz. The guitar artistry of this early exponent of urban blues was not only admired by blues musicians like B.B. King, Gatemouth Brown, Albert King, and Albert Collins, and rock guitarists such as Eric Clapton, Jimi Hendrix, Duane Allman, and Stevie Ray Vaughan, but by such jazz greats as Billie Holiday, Dizzy Gillespie, Lester Young, and many others with whom he recorded.

Stormy Monday is the first biography of T-Bone Walker to be published. Using dozens of interviews with Walker, as well as with members of his family, close friends, fellow musicians, and business associates, the book offers a remarkable frank insider’s account of the life of a blues musician and compulsive gambler, from the wild living and hard drinking on the road to a solid and contented family life at home.

“In a very real sense the modern blues is largely his creation.” blues authority Pete Welding has written about T-Bone Walker. “The blues was different before he came on the scene, and it hasn’t been the same since, and few men can lay claim to that kind of distinction. No one has contributed as much, as long, or as variously to the blues.”