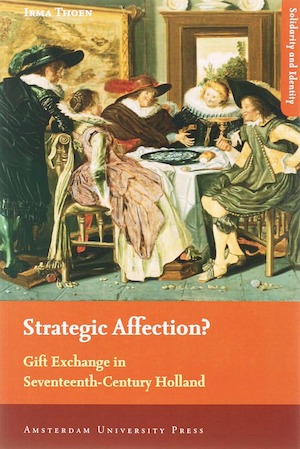 Irma Thoen is a cultural historian who received her doctorate from the European University Institute in Florence, Italy.
‘The first gift is the womb of the second’, notes Johan de Brune, the author of a seventeenth-century Dutch emblem book. This quote reflects the notion that, contary to modern day people, seventeenth century individuals did not feel uneasy about stressing the reciprocal character of thier gift exchange. We perceive ‘them’ as selfish beings who only exchange gifts for personal gain, while ‘we’ only give gifts altruistically and from the kindness of our hearts a fair assumption? And what does this assumption reveal about us?
In Strategic Affection ? Irma Thoen uses gift exchange practices as a way to analyse the nature of early-modern social relations. The practices of exchange, the meanings of gifts and the cultural conventions that inform the exchange of gifts in seventeenth-century Holland are discussed and compared to the social practice of gift exchange in Holland today. Theon’s analysis makes the men and women in her story come to life and allows the reader to enter their struggles for friendship, honour and survival, their fears, beliefs and feelings of relief.