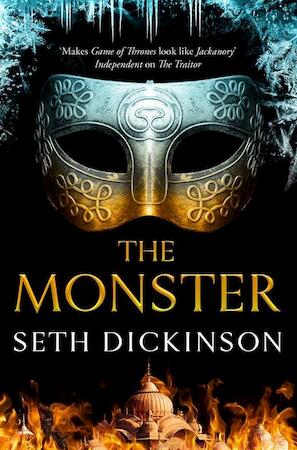 'Makes Game of Thrones look like Jackanory' Independent on The Traitor

The traitor Baru Cormorant is now the cryptarch Agonist - a secret lord of the corrupt empire she's vowed to destroy. But to gain the power to shatter this Empire of Masks, she's had to betray everyone she loved.

She's now hunted by a mutinous admiral and haunted by the wound which has split her mind in two. But Baru is still leading her dearest foes on an expedition, to gain the secret of immortality. It's her best and perhaps only chance to trigger a war - one that would consume the Masquerade.

But Baru's heart is broken, and she fears she can no longer tell justice from revenge . . . or her own desires from the will of the man who remade her.

The Monster is a breathtaking epic fantasy (published as The Monster Baru Cormorant in the US). It's the sequel to The Traitor, Seth Dickinson's powerful, critically acclaimed debut novel.