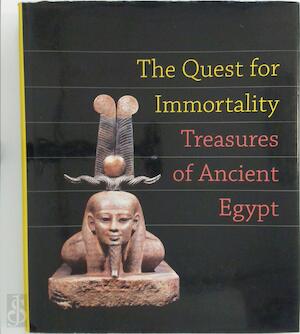 The quest for immortality

Ancient Egyptian antiquities are dominated by art and artifacts depicting the Netherworld -- the alternate universe mummified bodies would enter at the end of their physical lives, where they would live on for eternity. In this dazzling book, photographs and exhaustive texts illustrate how the promise of a glorious rebirth pervaded the daily life of Egyptians, from commoners to the most powerful pharaohs.The Quest for Immortality accompanies an exhibition of Egyptian funerary art by the same name, which dates from nearly two thousand years before the Christian era. Drawn from the collection of Cairo's Egyptian Museum, this major exhibition opens at the National Gallery of Art in Washington, D.C. in 2002 and travels throughout the United States over a five-year period before an extended tour in Europe. Objects such as coffins, tombs, masks, jewelry, papyri, sarcophagi, and monumental and small-scale sculpture reveal the reverence and awe with which this highly developed ancient culture considered the mystery of death. Fascinating essays explore Egyptian art history, customs, and worship, with specific focus on the Amduat, a book devoted to the pharaoh's twelve-hour journey to the afterlife. Additional writings detail the background of the collection and focus upon the role of art in ancient Egypt. Throughout, readers will experience the artistry of the ancient Egyptians as it comes to life in this magnificent book.