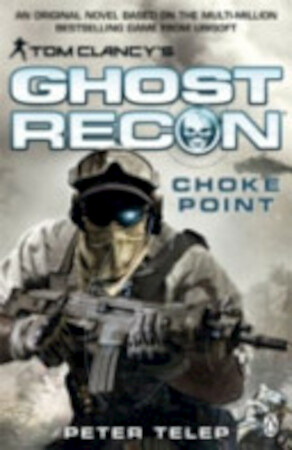 The U.S. Army's Special Forces are known for their highly specialized training and courage behind enemy lines. But there's a group that's even more stealthy and deadly. It's composed of the most feared operators on the face of the earth-the soldiers of Ghost Recon.

When a CIA agent operating in Colombia is kidnapped, the Ghosts battle their way through rebels to rescue the man. But during the operation, they discover evidence of a new Islamic fundamentalist group that is being backed by South American drug cartels and rebel groups.

The Ghosts follow a trail that leads them around the world in a struggle to uncover the group's true purpose, one that could mean billions to the South Americans, aid terrorists seeking to wreak havoc on American soil, and cause economic chaos all over the world.

But as the team chases down their quarry, they soon realize that their true foes have yet to reveal themselves...

Tom Clancy's Ghost Recon: Choke Point is one of a series of books that tie-in with the unbelievably popular video game Ghost Recon. Fans of Clancy and Cussler will love this as well as fans of the game.

Praise for Tom Clancy:
'There's hardly another thriller writer alive who can fuel an adrenaline surge the way Clancy can' Daily Mail
'The action comes thick and fast' The Times

Clancy has established himself as an undisputed master at blending exceptional realism and authenticity, intricate plotting, and razor-sharp suspense.