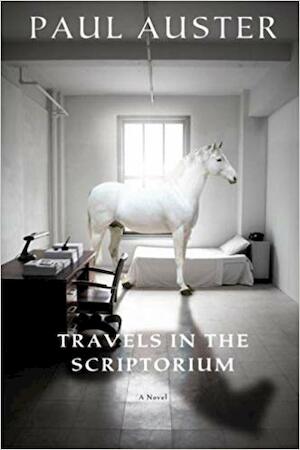 Travels in the Scriptorium

A man pieces together clues to his past—and the identity of his captors—in this fantastic, labyrinthine novelAn old man awakens, disoriented, in an unfamiliar chamber. With no memory of who he is or how he has arrived there, he pores over the relics on the desk, examining the circumstances of his confinement and searching his own hazy mind for clues.Determining that he is locked in, the man—identified only as Mr. Blank—begins reading a manuscript he finds on the desk, the story of another prisoner, set in an alternate world the man doesn’t recognize. Nevertheless, the pages seem to have been left for him, along with a haunting set of photographs. As the day passes, various characters call on the man in his cell—vaguely familiar people, some who seem to resent him for crimes he can’t remember—and each brings frustrating hints of his identity and his past. All the while an overhead camera clicks and clicks, recording his movements, and a microphone records every sound in the room. Someone is watching.Both chilling and poignant, Travels in the Scriptorium is vintage Auster: mysterious texts, fluid identities, a hidden past, and, somewhere, an obscure tormentor. And yet, as we discover during one day in the life of Mr. Blank, his world is not so different from our own.

"Travels in the Scriptorium" is ook verkrijgbaar als