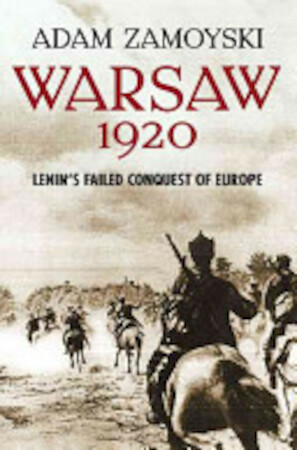 The dramatic and little-known story of how, in the summer of 1920, Lenin came within a hair's breadth of shattering the painstakingly constructed Versailles peace settlement and spreading Bolshevism to western Europe.

In 1920 the new Soviet state was a mess, following a brutal civil war, and the best way of ensuring its survival appeared to be to export the revolution to Germany, itself economically ruined by defeat in World War I and racked by internal political dissension.

Between Russia and Germany lay Poland, a nation that had only just recovered its independence after more than a century of foreign oppression. But it was economically and militarily weak and its misguided offensive to liberate the Ukraine in the spring of 1920 laid it open to attack. Egged on by Trotsky, Lenin launched a massive westward advance under the flamboyant Marshal Tukhachevsky.

All that Great Britain and France had fought for over four years now seemed at risk. By the middle of August the Russians were only a few kilometres from Warsaw, and Berlin was less than a week's march away. Then occurred the 'Miracle of the Vistula': the Polish army led by Jozef Pilsudski regrouped and achieved one of the most decisive victories in military history.

As a result, the Versailles peace settlement survived, and Lenin was forced to settle for Communism in one country. The battle for Warsaw bought Europe nearly two decades of peace, and communism remained a mainly Russian phenomenon, subsuming many of the autocratic and Byzantine characteristics of Russia's tsarist tradition.