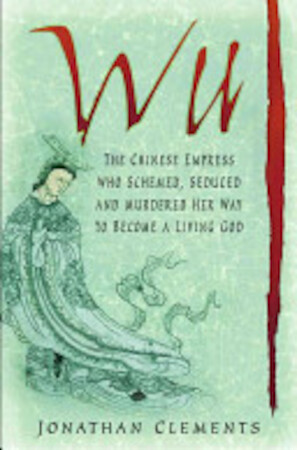 Wu was the first and only woman in Chinese history to become a reigning empress. Jonathan Clements tells the dramatic and colourful story of the seventh-century daughter of a lumber merchant who used her looks, cunning and connections to rule one of the largest empires of the world.

Before Wu was born, prophecies predicted that she would become an emperor. It was thus a source of disappointment to her family when she turned out to be a girl. But they underestimated Wu's steely determination to succeed. At the age of 13 she took the first steps on her path to power when she was selected as a concubine to the 40-year-old Supreme Emperor (Taizong).

When the emperor fell ill, the ambitious Wu committed a capital crime by seducing his heir. Her gamble paid off, and when the emperor died, his besotted heir, now the High Emperor (Gaozong), rescued Wu from life in a convent. Back in the palace, Wu wasted no time in framing and executing her opposition, the empress and the beautiful Pure Concubine. Her ruthlessness even extended to her own family. After her husband had died, she poisoned her strong-willed eldest son, tried to rule through his two more malleable brothers but eventually took the throne herself.

Coloured by intrigue, murder, incest and seduction, Wu's incredible true story is a rich and fascinating tale. Drawing on the original Chinese sources, Jonathan Clements reveals the life of this extraordinary woman who proclaimed herself a living god, founded a new dynasty and was only deposed, aged 79, after jealous courtiers had murdered her two young lovers.