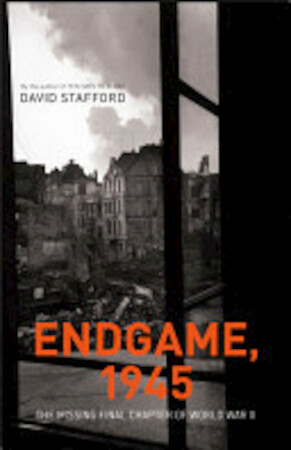 To end a history of World War II at VE Day is to leave the tale half told. While the war may have seemed all but over by Hitler's final birthday (April 20), Stafford's chronicle of the three months that followed tells a different, and much richer, story.

ENDGAME 1945 highlights the gripping personal stories of nine men and women, ranging from soldiers to POWs to war correspondents, who witnessed firsthand the Allied struggle to finish the terrible game at last. Through their ground-level movements, Stafford traces the elaborate web of events that led to the war's real resolution: the deaths of Hitler and Mussolini, the liberation of Buchenwald and Dachau, and the Allies' race with the Red Army to establish a victors' foothold in Europe, to name a few. From Hitler's April decision never to surrender to the start of the Potsdam Conference, Stafford brings an unprecedented focus to the war's "final chapter."

Narrative history at its most compelling, ENDGAME 1945 is the riveting story of three turbulent months that truly shaped the modern world.