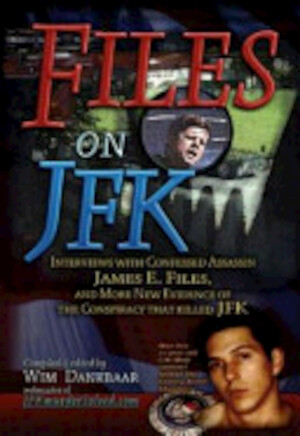 On the eve of the 40th Anniversary of the JFK Assassination, from Stateville Correctional Center, Joliet Illinois, confessed assassin James Earl Files tells of his role in The Crime of the Century.
In 1989, Houston private investigator Joe West launched an independent investigation to find the true assassins of President John F. Kennedy. After three years of disappointments and dead-ends, West received a tip from an unexpected source: an FBI agent who asked to remain nameless. The tip led Joe West to Stateville Correctional Center at Joliet Illinois, and a prisoner named James E. Files.
Files, who was serving time for attempted murder of an Illinois police officer, was at first, very reluctant to talk. Slowly and meticulously, West established a relationship with Files. Through months of personal visits and detailed correspondence, Files began to reveal his participation in the JFK assassination.
Files was nearing a full confession when West became ill and suddenly passed away in 1993. It took 13 months after Joe West's death, but on March 22, 1994, associates of West's videotaped an interview with Files. It was during this interview that James Files first confessed to being the shooter on the grassy knoll in Dealey Plaza on November 22, 1963, that it was he who delivered the final, fatal shot to JFK's right temple. He also implicated organized crime members Charles Nicoletti, Johnny Roselli and Sam Giancana, who all had been murdered in the 1970s.
For the next two frustrating years, attempts were made to bring the interview to the public. This finally led to an agreement for a nationwide TV program. As the program was being prepared, a consultant became involved.Based on his input, the program was suddenly cancelled for reasons that have since been proven to be untrue. Also, reputable JFK researchers have confirmed that the consultant was solidly connected to the Central Intelligence Agency.
Upon his retirement in 1998, the FBI agent who had given the original tip on James Files, decided to come forward. His name is Zack Shelton. Mr. Shelton, who worked organized crime for 28 years, has had an impeccable service record. With the financial support of Dutch businessman Wim Dankbaar, Shelton offered to proceed with a new investigation to either prove or disprove the confession of James E. Files. Shelton called upon and received the assistance of over ten of his veteran FBI colleagues. All of these men have had equally impressive careers with the Bureau.
While the FBI has officially declared James Files to be "not credible," the findings of Shelton and his colleagues have shown otherwise. After painstaking efforts to persuade Files, who had vowed to never again be interviewed, he ultimately agreed to another interview. The second and last interview was taped on November 19, 2003.