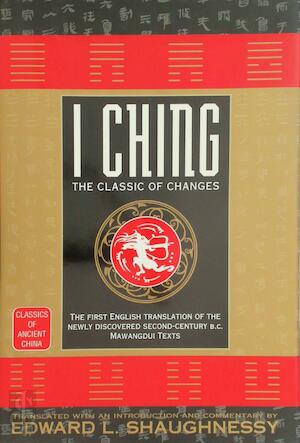 For more than two thousand years, the oracular, enigmatic pronouncements of the I Ching (Classic of Changes) have intrigued and inspired readers. In the West, scholars have long regarded the volume as one of the seminal texts of Chinese culture, comparable to the Bible or the Upanishads, and readers everywhere have turned to the hexagrams, line statements, and commentaries for guidance on every imaginable life situation.

Given the enduring importance of this work, it was a momentous event when a significantly different I Ching text was unearthed in Mawangdui, China, in 1973--the first new manuscript of the work to appear in two thousand years. Now translated into English for the first time by one of West's leading scholars of the I Ching, the Mawangdui text brings welcome clarity, accessibility, and novelty to this beloved classic.

Like the received version, the Mawangdui I Ching and its commentaries begin with a central core of sixty-four hexagrams, but in an important departure, the hexagrams in the newly discovered text are arranged in a systematic and logical way and, in many cases, are assigned different names. The line statements that accompany the hexagrams frequently differ from the received text. In addition, the Mawangdui version contains five new commentaries that had been lost for more than two thousand years, including the surprising discovery of a commentary that quotes Confucius extensively on how he had come to change his earlier, negative, views about the importance of the I Ching.

The new material, the logical arrangement of the hexagrams, the more Taoist tone of the "Appended Judgments," the illuminating introduction and notes by Edward L.Shaughnessy and, above all, the lucid purity of his translation, make the Mawangdui I Ching a treasure. Readers who wish to use the hexagrams for divination will find this version more intriguing than even the previous text; scholars will derive new insights from the Mawangdui commentaries and from the "Appended Judgments," one of the most sophisticated and subtle essays in all of Chinese philosophy; admirers of world literature will cherish this volume as a work of timeless artistry.