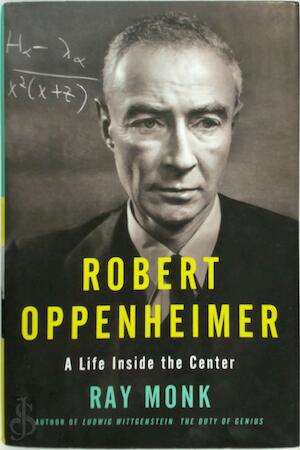 A Life Inside the Center

Robert Oppenheimer was among the most brilliant and divisive of men. As head of the Los Alamos Laboratory, he oversaw the successful effort to beat the Nazis in the race to develop the first atomic bomb--a breakthrough that was to have eternal ramifications for mankind and that made Oppenheimer the "Father of the Atomic Bomb." But with his actions leading up to that great achievement, he also set himself on a dangerous collision course with Senator Joseph McCarthy and his witch-hunters. In Robert Oppenheimer: A Life Inside the Center, Ray Monk, author of peerless biographies of Ludwig Wittgenstein and Bertrand Russell, goes deeper than any previous biographer in the quest to solve the enigma of Oppenheimer's motivations and his complex personality.
The son of German-Jewish immigrants, Oppenheimer was a man of phenomenal intellectual attributes, driven by an ambition to overcome his status as an outsider and penetrate the heart of political and social life. As a young scientist, his talent and drive allowed him to enter a community peopled by the great names of twentieth-century physics--men such as Niels Bohr, Max Born, Paul Dirac, and Albert Einstein--and to play a role in the laboratories and classrooms where the world was being changed forever, where the secrets of the universe, whether within atomic nuclei or collapsing stars, revealed themselves.
But Oppenheimer's path went beyond one of assimilation, scientific success, and world fame. The implications of the discoveries at Los Alamos weighed heavily upon this fragile and complicated man. In the 1930s, in a climate already thick with paranoia and espionage, he made suspicious connections, and in the wake of the Allied victory, his attempts to resist the escalation of the Cold War arms race led many to question his loyalties.
Through compassionate investigation and with towering scholarship, Ray Monk's Robert Oppenheimer tells an unforgettable story of discovery, secrecy, impossible choices, and unimaginable destruction.