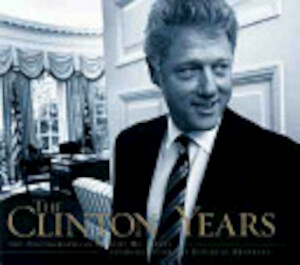 Robert McNeely -- President Bill Clinton's official photographer from 1992 to 1998 -- has traveled the world and roamed the halls of the White House, a virtual fly-on-the-wall, documenting the day-to-day political and private lives of President Clinton and First Lady Hillary Rodham Clinton. The Clinton Years presents in dramatic detail a behind-the-scenes look at the White House with intriguing glimpses into the personal side of Clinton's presidency.

Clinton trusted McNeely's vision completely and granted him full access to the inner workings of the presidency. McNeely was Clinton's constant shadow, quietly recording for posterity the president's moods, his reactions to key moments and events, his prowess as a politician, his personal charisma and presence, and his interactions with world leaders. An intimate look at the man behind the politician, this collection also reveals Clinton's relationships with his wife, his staff, his public and the world. These striking images compel the viewer to recognize what an extraordinarily complex individual Bill Clinton is. It is more than a portrait of a president; it is an education about the presidency. The Clinton Years is an essential record of Bill Clinton's legacy.

"The Clinton Years tells for the first time the real story of this administration in photos. For those of us who were there, these photos by White House photographer Bob McNeely are more revealing in their emotions than all of the words that have been written about this president."