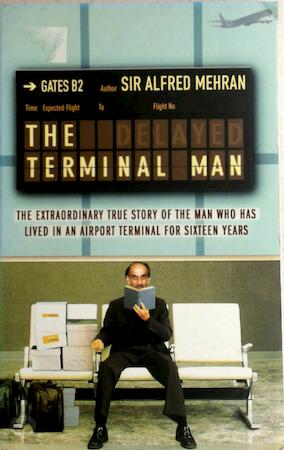 The extraordinary true story of Mehran Karimi Nasseria, better know as 'Sir Alfred' - a man with no official identity or country.Sir Alfred has been living in the departure lounge of Terminal 1 of Charles de Gaulle Airport in Paris for 16 years. He sleeps on a red bench borrowed from an old bar, dines at McDonalds every day, and is surrounded by piles of magazines stored in cargo boxes and his extensive diary. Sir Alfred's odyssey began when the death of his father revealed a long hidden family secret that shattered his life and sense of self. A secret that meant Sir Alfred had to leave the country to travel to England to study. When all communications with his family mysteriously stopped, Sir Alfred was forced to return to Iran where he was arrested at the airport. He was imprisoned, tortured, and then expelled with a passport valid for just one year. Sir Alfred arrived at Charles de Gaulle on 8th August 1988 intending to take a plane to London - amazingly 16 years later he is still there waiting for his flight. Without the proper documentation he quickly found himself trapped in a bureaucratic Catch-22 nightmare. Fearing arrest as an illegal immigrant if he left the terminal building, he has spent the last decade and a half waiting "for my identity" while lawyers and government officials argued about his case.Political refugee, prisoner, exile, rebel, gentleman, citizen of the world, media magnet and delayed passenger, The Terminal Man tells Sir Alfred's incredible and unique life story in his own words