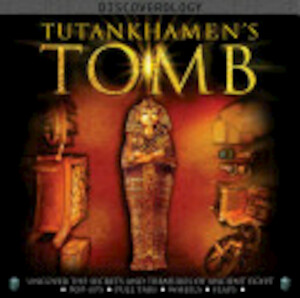 Combining words and unusual illustrations that incorporate pop-ups, pull tabs, wheels, and flaps, this book tells the dramatic story of archaeologist Howard Carter and his amazing journey to Egypt that culminated with his discovery in 1923 of Tutankhamen's tomb. This beautifully illustrated volume features stunning color photos of objects discovered in Tutankhamen's tomb, as it takes boys and girls along on a virtual archaeological dig. They explore the boy pharaoh's tomb and gain insights into the ancient Egyptian civilization, with emphasis on the Egyptians' particular form of belief in an afterlife. Die-cut holes in the book's pages are part of an ingenious design in which a model of Tutankhamen's sarcophagus literally pops up when the book is opened. And a "sliding door" on the front cover's tomb illustration can be moved back to reveal an illustration of the mummy. The book's lively narrative style includes excerpts from Howard Carter's diary and brings his adventure fully alive. Here is a beautifully designed book that is every bit as much fun as it is educational.